45 percent of adults aged 50 to 64 are concerned they won’t be able to afford insurance in retirement; 68 percent are concerned about federal changes to health insurance

With the dawn of a new year, most Americans have just started a new health insurance coverage period -- whether they receive their coverage through a job, buy it themselves or have a government plan.

But a new national poll suggests that many people in their 50s and early 60s harbor serious worries about their health insurance status, now and in the future. Download the full poll report

Forty-five percent say they have little or no confidence that they’ll be able to afford the cost of health coverage once they retire. And 27 percent said they’re not sure they’d be able to afford their coverage over the next year. One in ten said they’d thought about going without health insurance for 2019, though only five percent actually had decided to do so at the time of the poll.

Another 19 percent of adults age 50 to 64 decided to stay in their current job rather than changing jobs or retiring, just to keep their job-related coverage.

The new findings from the National Poll on Healthy Aging also indicate that half of adults age 50-64 closely follow the news about possible changes to Affordable Care Act, Medicare or Medicaid. The poll was conducted well before a December court ruling about the Affordable Care Act’s constitutionality -- but already, 68 percent said they were concerned about how their health insurance might change due to potential federal policy changes.

The poll of 1,024 adults in their pre-Medicare years was conducted by the University of Michigan Institute for Healthcare Policy and Innovation, and sponsored by AARP and Michigan Medicine, U-M’s academic medical center.

Renuka Tipirneni, M.D., M.Sc., a U-M health researcher who helped lead the poll design and analysis, notes that the closer adults get to retirement, the more important it is for them to understand options for coverage and associated costs.

“As people age into the years when many chronic diseases begin to take hold, and when they’re still years away from Medicare coverage, it’s important to talk with someone knowledgeable about all the options for coverage to bring down out-of-pocket costs and better navigate health care in this critical period,” says Tipirneni, a general internist who has studied the public’s health insurance knowledge and use.

The poll focuses on those approaching the “magic” age of 65, when most Americans qualify for Medicare health insurance. It was conducted in fall, during the open enrollment period for many employers’ insurance plans, and near the start of open enrollment for Medicare and plans available to individuals on federal and state marketplace sites.

Nearly two-thirds of those polled said their health insurance comes through their job or another person’s job. Around twenty percent had Medicaid, Medicare or other government-provided insurance, and eight percent said they buy their own coverage.

“The Affordable Care Act was intended to cut down on ‘job lock’, where a person feels trapped in their job by their need to preserve their health insurance,” says Preeti Malani, M.D., director of the poll and a professor of internal medicine at the U-M Medical School. “We were surprised by the low percentage of these adults who bought their own coverage through the ACA exchanges, and the relatively high percentage who felt they had to keep a job or delay retirement in order to keep a plan. Innovative policy solutions are needed to help adults in this age group navigate their insurance options.” 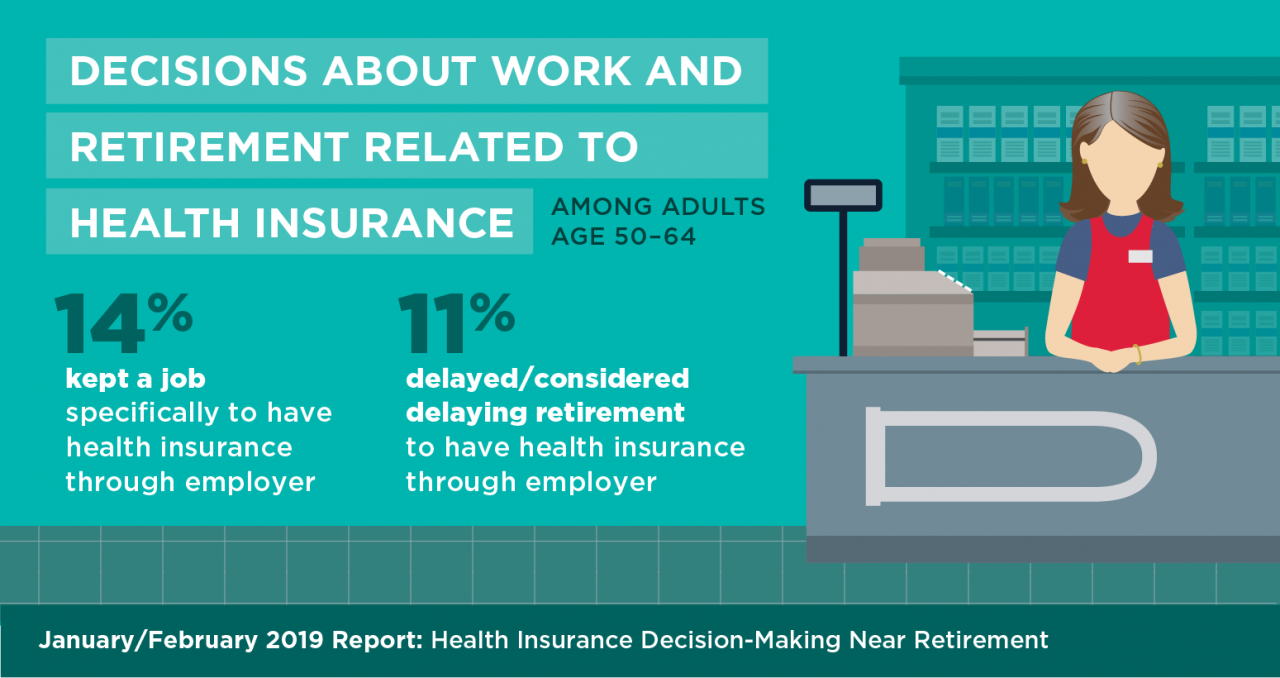 Worry about the ongoing debate over changes to the ACA, Medicaid and Medicare – whether through congressional voting, presidential action or court rulings – could be driving some of these decisions.

“This survey validates that health care coverage is a top concern of older Americans,” says Alison Bryant, Ph.D., senior vice president of research for AARP. “The uninsured rate among the 50- to 64-year-old age group dropped 47 percent since implementation of the ACA, but we have to continue to improve access and affordability of health coverage for all older adults.”

The poll also asked respondents about their understanding of health insurance terms, where they got information about health insurance, and their level of confidence that they could find out what their insurance covered or what services would cost them.

In all, one in five polled said they had little or no confidence that they could understand insurance terms – and about one in four said they didn’t think they knew how to find out what their insurance plan would cover before they received a health care service, or what their out-of-pocket costs would be.

Recently, Tipirneni and colleagues published a study about the link between a person’s confidence in understanding their health insurance policy and their tendency to avoid health care due to cost. The work, published in JAMA Network Open, found that nearly 30 percent of insured adults over age 18 avoided seeking certain types of care because of the potential costs for them. Those with the least confidence in their understanding of common health insurance terms were more likely to say they had avoided preventive or non-preventive care due to cost.

The National Poll on Healthy Aging results are based on responses from a nationally representative sample of 1,024 adults aged 50 to 64 who answered a wide range of questions online. Questions were written, and data interpreted and compiled, by the IHPI team. Laptops and Internet access were provided to poll respondents who did not already have them.