Short-Term Health Plans: State Options to Support the Health of Moms and Babies

This brief examines approaches that states are taking to restrict access to short-term health plans, which offer limited benefits and do not cover maternity care.

Maternity Coverage is Important for Healthy Moms and Babies

Coverage helps moms manage serious medical conditions such as diabetes, hypertension, and substance use disorder. These conditions affect at least 10% of pregnancies (with higher rates in rural and low-income communities) and put women at increased risk of pregnancy complications. [2]

Half of pregnancies in the U.S. are unplanned, and nearly 4 million babies are born every year in the U.S.

Many women—even those with health insurance—lacked maternity coverage prior to 2014.

In 2014, the Affordable Care Act (ACA) increased access to maternity services by:

Federal regulations that went into effect in October 2018 re-expanded access to short-term plans by:

What are short-term plans?

Short-term plans were designed to provide coverage for major medical events for a limited duration of time. They are not required to cover essential health benefits or comply with other ACA market reforms. None cover maternity services, according to one review of short-term plans offered in 45 states and the District of Columbia on two online private insurance marketplaces (eHealth and Agile Health Insurance).

Since pregnancy is not a planned healthcare event for many women, they may not consider the importance of maternity coverage when shopping for insurance.

Pregnancy itself is not considered a qualifying life event and does not make a woman eligible for a Special Enrollment Period. If a woman covered by a short-term plan becomes pregnant outside of the open enrollment period, she may face significant out-of-pocket spending for maternity care.

Short-Term Plans May Be Attractive to Some, But May Have Health and Financial Consequences for Mother and Child

State Regulatory Options to Support the Health of Moms and Babies

States have regulatory authority over short-term plans and have various policy options to address women’s access to maternity coverage and care that improves maternal-child health. [8] The chart below outlines some of the approaches that states have taken. 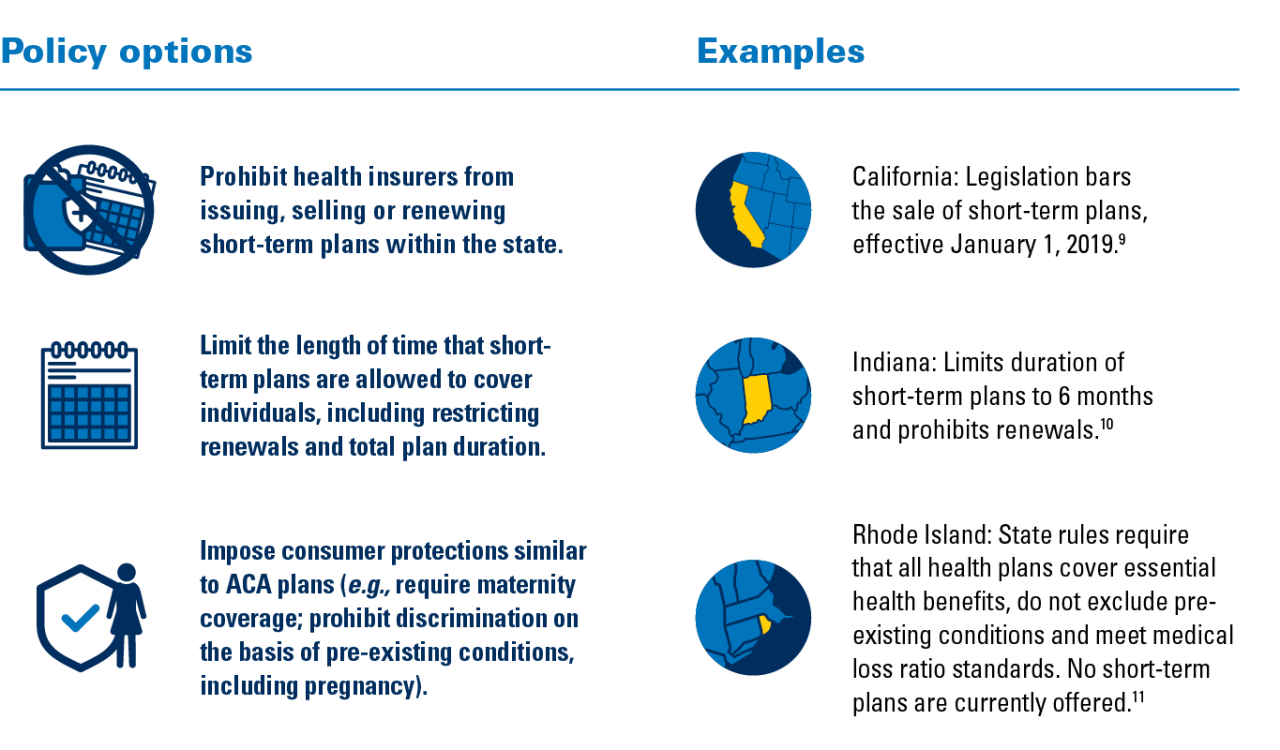 5. The cost of having a baby in the United States. Truven Health Analytics Marketscan Study (January 2013). http://transform.childbirthconnection.org/wp-content/uploads/2013/01/Cost-of-Having-a-Baby1.pdf

ACKNOWLEDGMENTS
This policy brief was supported by the IHPI Policy Sprint program, which provides funding and staff assistance to IHPI member-led teams in undertaking rapid analyses to address important health policy questions and develop products that inform decision-making at the local, state, or national level.