Growing up, Erica Marsh remembers visiting aunties in the hospital and taking food to her mom’s friends who were recovering from surgery.

They all suffered from the same condition: uterine fibroids.

“I didn’t really know what fibroids were except that they seemed to impact many of the women in my life,” says Marsh, M.D., chief of the division of reproductive endocrinology and infertility at the Center for Reproductive Medicine at Michigan Medicine Von Voigtlander Women's Hospital.

Not until years later, as she went through medical school and training in obstetrics and gynecology, did she learn more about the prevalent disease that is the top reason for hysterectomies – and ultimately devote her career to improving treatment for it.

By age 50, nearly two-thirds of women experience uterine fibroids, noncancerous tumors that grow in the uterus and range from pea to football sized and even larger. While some women with fibroids don’t have symptoms, others have significant pain, anemia, bleeding, increased urinary frequency, fertility problems and pregnancy complications.

And they disproportionately impact women of color. Black women are diagnosed with fibroids roughly three times as frequently as white women, develop them earlier in life and tend to experience larger and more numerous fibroids that cause more severe symptoms.

Nearly a quarter of Black women between 18 and 30 have fibroids compared to about 6% of white women, according to some national estimates. By age 35, that number increases to 60%. Black women are also two to three times more likely to have recurring fibroids or suffer from complications.

The reasons for the disparities are unclear, although research offers some clues.

“There are several possible risk factors that may be more prevalent among Black women that could contribute to the growth and substance of tumors,” Marsh says. “But none of these factors have been proven to cause fibroids.”

“We need more data to better understand why Black women get fibroids more frequently and with more severity.”

Black women are also at least twice as likely as white women to remove their uterus through a hysterectomy. A third of hysterectomies are done during peak childbearing years between ages 18 and 44.

“Despite minimally invasive options, Black women continue to dominate the percentages of women having hysterectomies for benign disease,” Marsh says. “We need to understand why.”

In less severe cases, women are often advised to manage symptoms through medical treatment and “watchfully wait” instead of undergoing permanent surgery. Other minimally invasive options include embolization or ablation – which destroy fibroid tissue to ease symptoms – or surgically removing fibroids through a myomectomy.

Research is lacking on how fibroids impact different minority groups, an area Marsh’s studies aim to shed more light on – specifically how the disease affects Latinx and Asian patients.

“There is a dearth of data on how fibroids affect Hispanics and other underrepresented groups. We hope to better understand the symptoms, effectiveness of treatment and prevalence among all women,” Marsh says.

“Research has taught us that if you’re not included, then you’re not represented. We want to make sure research is inclusive and reflective of everyone affected by this disease.”

Marsh’s previous research also suggests that fibroids may cause more than physical pain – some women with the condition experience significant distress that negatively affects quality of life, including depression, anxiety and body image issues. This psychological impact particularly affected racial and ethnic minorities and women in lower income brackets.

Half of the women surveyed in her study felt helpless and believed that they had no control over their fibroids. Many women shared concern over appearing less attractive, which led to difficulties becoming intimate.

“I saw a lot of angst, sadness and fear in women through their journey with uterine fibroids. These experiences made me want to understand not only the biology of these tumors but the emotional and psychological impact, as well as disparities that may contribute to these challenges,” Marsh says.

“Many patients showed a significant emotional response to their fibroids but lacked support to help them deal with these issues,” she adds. “We need to rethink our approach to caring for these women and make sure we’re supporting them both emotionally and physically. We also need to empower them by counseling them on all of their choices for treatment to help them make the choice that’s best for them.”

Many women delay treatment because they think symptoms are “normal”

Another universal theme: Many women suffer with symptoms for a long time before getting treatment, which means many who live with the chronic condition are undiagnosed.

“Our research reinforced what we often see in our practice. By the time many women saw a doctor for help, they were anemic, fatigued and very sick,” Marsh says.

When asked, these patients would say they thought certain symptoms, such as pain during sex or very heavy periods, were simply normal.

“This made us realize that we have to screen better. It’s not enough for doctors to ask ‘do you have normal periods?’” Marsh says.

“Bleeding heavily for 10 days is not normal at all but if that’s what your mom or sisters experienced, you might think it is. These misconceptions of ‘normal’ is a big reason many women delay treatment and suffer longer.”

Marsh’s research also indicates these misconceptions may be particularly prevalent among lower income and minority populations, who are less likely to self-treat and carry greater symptom burden compared with higher income or white women.

“Our research suggests that many women are likely undiagnosed,” Marsh says.

“Fibroids are a prevalent condition that cause significant distress, and those who live with it often feel isolated, alone and in pain.

“It’s not acceptable for women to suffer and not know their options. We need to improve uterine fibroid awareness and education among all populations.”

At Michigan Medicine, Marsh is the lead researcher for a national project among several U.S. centers to compare treatment strategies and improve fibroid treatment. Her work in Ann Arbor, Flint and Detroit also focuses on cultural, ethnic and genetic drivers of reproductive disease in women.

She hopes to help answer more questions about how to better treat women with the disease.

“Unfortunately, we don’t have data that allow us to compare outcomes between patients who receive different therapies for fibroids, especially those with different racial, ethnic and income backgrounds,” Marsh says.

“Through this work, we have an opportunity to learn more about what drives decision making for patients. Understanding how quality of life, recurrence rates and fertility rates differ between treatments is also critical information for women, their families and clinicians who are making decisions about fibroid care.” 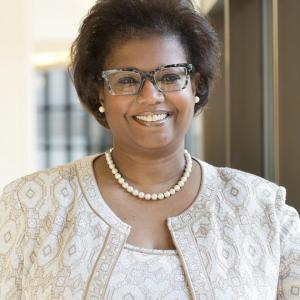