Medicaid expansion boosts Michigan’s economy and will more than pay for itself, IHPI study finds

State government will end up with more than it spends, even as costs rise, while Michiganders get 30,000 more jobs and $2.3B more to spend each year

ANN ARBOR, Mich. — Michigan’s expansion of Medicaid health insurance coverage has boosted the state’s economy and budget, and will continue to do so for at least the next five years, according to a new University of Michigan study.
The expansion’s total economic impact will generate more than enough funds for the state budget to cover the cost of the program in the current fiscal year, the researchers report in the New England Journal of Medicine.
The expanded Medicaid program will continue to have this self-paying effect even as the state’s share of its cost increases every year until fiscal 2021 under federal law, they project. Over the next five years, the state will end up with more money in its coffers because of the program than it actually spends on the program.
A wide range of economic effects
The analysis looks at the total economic impact of the Healthy Michigan Plan, which began in April 2014 and currently covers about 600,000 low-income Michiganders. Most were uninsured before enrolling in the plan, which is mainly supported by federal funds under the Affordable Care Act. The maximum income a single adult can have to enroll in the Healthy Michigan Plan is about $16,400.
But besides the enrollees, other Michiganders are benefiting from the expansion, the U-M team shows. The ripple effects generate more than 30,000 new jobs every year – one-third of them in health care and 85 percent in the private sector. These jobs yield about $2.3 billion more in personal spending power each year for Michigan residents.
The new jobs and related personal spending are generating approximately $150 million in income and sales tax revenue annually for the state. The state will also continue to save money it would have spent on other safety net programs if Medicaid had not expanded.
“The economic impact of Medicaid expansion extends well beyond health care providers and the wallets of those who formerly had no insurance,” says John Z. Ayanian, M.D., M.P.P., lead author of the new study and director of the U-M Institute for Healthcare Policy and Innovation. “We hope that our findings will provide needed evidence to Michigan lawmakers as they consider the future of the program, as well as informing decisions about Medicaid expansion in other states.”
Ayanian and U-M health economist Helen Levy, Ph.D., conducted the study with Gabriel M. Ehrlich, Ph.D., and Donald R. Grimes, M.A. from the Research Seminar in Quantitative Economics, a U-M economic modeling and forecasting unit. The team used the same economic model that this unit employs to advise the state for fiscal planning.
Under Ayanian’s direction, IHPI is also leading the federally required independent evaluation of how the Healthy Michigan Plan is affecting enrollees, health care providers and the state. That effort is funded by a state contract. The new study was supported by a grant from the Commonwealth Fund and conducted separately from the evaluation project for the state.
“The Healthy Michigan Plan has not only covered more than 600,000 Michiganders – most of whom had been uninsured – it has also lightened the economic load on the state, on families and businesses, and on health care providers. Federal spending through Medicaid gives a big boost to the state’s economy,” says Levy, a research professor in the U-M Institute for Social Research.
Five-year forecast
The study modeled the impact of the Healthy Michigan Plan from its launch in April 2014 through the end of fiscal year 2021. Starting in the 2017 fiscal year that began in October 2016, the state will pay five percent of the cost of care for those enrolled. By 2020, that share will rise to 10 percent of the total cost of the program.
For 2017, the researchers find, the economic impact of expansion means the state will finish with $432 million more than its share of the program’s cost, because of new tax revenue and avoided spending. In 2021, the state will end up with $162 million more than its share of the cost.
The researchers accounted for $20 million that the state spends to administer the program, and  $235 million a year that it saves on selected health services that it previously funded but are now covered through the Healthy Michigan Plan. Those services include some health care for prisoners, community mental health services, and prior programs for extremely impoverished adults.
Hospitals and many other providers previously absorbed the cost of caring for uninsured people, so their ability to spend those dollars in other ways was included – as were the contributions they make to the state to support part of the cost of the expansion. Increased taxes paid by the privately run health plans that enroll Healthy Michigan Plan participants were also included.
The increase in personal spending power includes the estimated $490 that each uninsured person likely spent, on average, for his or her health care every year before the expansion took effect. Spending power also takes into account the premiums on employer-sponsored or private insurance plans that some Healthy Michigan Plan participants had before transitioning to the new option.
The law that authorized Medicaid expansion in Michigan allows the program to be ended if the state’s costs exceed new revenue and savings for the state budget. Nineteen other states have not expanded the program, under an ACA provision that allows for coverage for all adults with incomes under 138 percent of the federal poverty level.
Author affiliations: Ayanian is the Alice Hamilton Professor of Medicine at the Medical School. He and Levy both hold joint positions at the U-M Ford School of Public Policy and the U-M School of Public Health and are members of IHPI. Ehrlich is an assistant research scientist and Associate Director of the Research Seminar in Quantitative Economics in the U-M Department of Economics. Grimes is a senior research area specialist at the U-M Institute for Research on Labor, Employment, and the Economy.
Reference: NEJM, DOI DOI 10.1056/NEJMp1613981 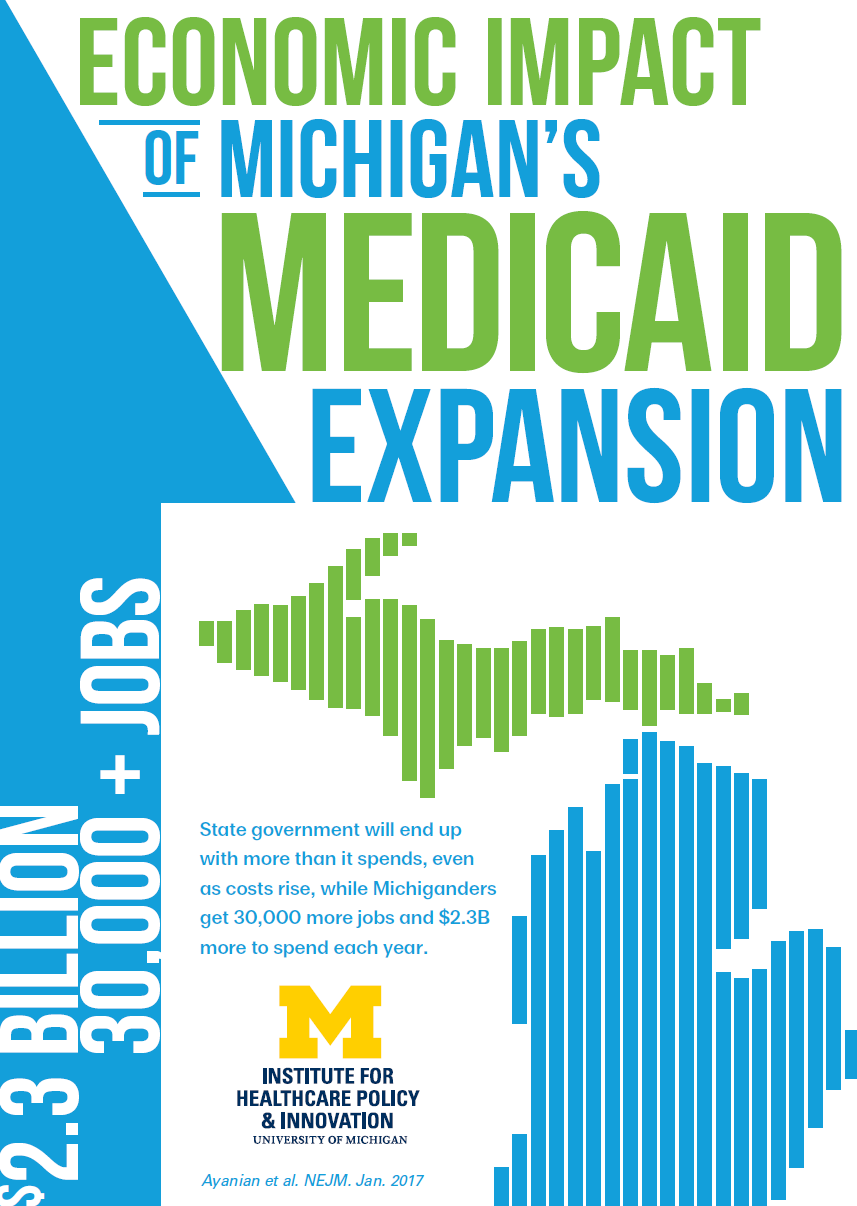