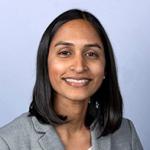 Renuka (Renu) Tipirneni, M.D., M.Sc., Assistant Professor of Internal Medicine at Michigan Medicine, received a 2019 Impact Accelerator (IA) Award for her role in the evaluation of Medicaid policy changes in Michigan, and her timely and insightful translation of those findings to inform policy discussions and program implementation at the state and national level.

Each year, IHPI presents the IA awards to its members who have demonstrated an exceptional commitment to ensuring that academic research makes the greatest possible real-world impact in healthcare policy and practice.

“The impact of health insurance policies and programs on low-income and other vulnerable populations has been the focus of my work,” Tipirneni says. “State health policy in particular is such a natural laboratory for connecting local community work with what's happening more broadly, and it’s been exciting to take what we're doing in Michigan to inform policy implementation in other states, and vice versa.”

Tipirneni’s effectiveness has come in large part from forging connections with policymakers and other stakeholders who are keenly interested in incorporating evidence into their decision-making, and working collaboratively to find the information they need at the speed required to answer pressing policy questions – even to the point of conducting custom analyses to help inform specific queries from policymakers. “When these opportunities arise, it behooves us to pause and really try to get the right data in policymakers’ hands to inform what they’re trying to do in real time,” she says.

As one example, Tipirneni’s 2015 study of primary care access made important and timely contributions to understanding how Medicaid expansion in Michigan under the Affordable Care Act was affecting Medicaid enrollees in the state. Using “secret shopper” methods, Tipirneni’s research found that, contrary to concerns that there would not be enough primary care providers to meet demand from the surge of new patients, appointment availability actually increased for those with Medicaid coverage while wait times for new patient appointments were essentially no different. Tipirneni developed and presented issue briefs on these findings to senior policy staff in the Michigan Department of Health and Human Services (MDHHS), and also created maps displaying the primary care access data across the state’s geographic regions to help MDHHS staff target additional outreach.

Tipirneni and her colleagues also published some of the first studies in the country to inform Medicaid work requirements, and their recommendations on how to mitigate potential health risks related to implementing these requirements (outlined in a Bridge Magazine op-ed and a New England Journal of Medicine Perspective piece) have been used to shape state and federal policies in this area.

During debate in the Michigan legislature in 2018 on a bill to implement Medicaid work requirements, Tipirneni and the IHPI team engaged with MDHHS around how their research findings could inform work requirement exemptions. The law as passed ultimately included a greater number of exemptions and limited the age of those who must meet the requirement. Nationally, as federal courts began considering the legality of Medicaid work requirements, Tipirneni’s work on the topic was also cited in amicus briefs submitted in a lawsuit brought by a group of Medicaid enrollees challenging the approval of a waiver program in Kentucky that was the first to include a work requirement. This federal court case now includes many other states and may eventually head to the Supreme Court.

The research on primary care access and the implications of work requirements have been complementary to Tipirneni’s involvement with IHPI’s evaluation of the Healthy Michigan Plan, which has been ongoing since 2014. She describes the close partnership with MDHHS as critical in enabling the team’s robust findings, which Tipirneni says the state has been using to improve the HMP program throughout the evaluation process.

“From the first five years, we saw evidence of health improvements and people's ability to engage in other aspects of their lives because of that, such as employment, job seeking, and being engaged with family and community – these are all things we were able to track longitudinally with the unique design of our evaluation,” Tipirneni says. “In my mind, the HMP evaluation is an example of doing effective mixed methods policy research on a large scale, by integrating various sources of data and also involving members of the community in the evaluation.”

As a primary care provider herself, Tipirneni has found motivation and inspiration for her own research out of the concerns expressed by her own patients. As one example, in collaboration with IHPI’s National Poll on Healthy Aging (NPHA), Dr. Tipirneni developed a survey module to examine health insurance decision-making near retirement. The poll results, published in January 2019, found that nearly half of adults 50-64 have concerns about being able to afford health insurance in retirement, while even more were concerned about potential changes to their health insurance coverage due to changes in federal policies.

For Tipirneni, the NPHA results validated the concerns about affordability that she had been hearing from her older patients, many of whom said they were planning to delay retirement in order to retain employer-sponsored health insurance. When introducing a bill aimed at giving those 50 years and older the option to buy into Medicare coverage in February 2019, U.S. Senator Debbie Stabenow (Michigan) cited the NPHA poll results, and the cutoff age was informed by data that Tipirneni’s team had worked to provide in addition to the poll results.

“Dr. Tipirneni has demonstrated deep commitment to informing policymakers and the public,” one nominator noted. “She is a change agent whose work has an enduring positive impact on the most vulnerable residents of our country.”

©2023 The Regents of the University of Michigan | Disclaimer | Privacy Statement