Study finds not all women get appropriate care for cervical cancer

Black and Hispanic women are less likely to receive guideline-based care, especially at high-volume hospitals, according to a new analysis

Women with locally advanced cervical cancer whose treatment follows national guidelines for care have better survival, regardless of race, ethnicity or stage of cancer.

But fewer than 3 out of 5 women received guideline-based care. For black and Hispanic women, just over half did, a new study finds. And this could help explain why cervical cancer outcomes tend to be worse for these women.

Researchers analyzed records from 16,195 patients treated between 2004 and 2012 for locally advanced cervical cancer. Patient information was reported to the National Cancer Database, which represents 96 percent of the cervical cancer cases in the United States.

Overall, 57 percent of patients received guideline-based care. But those rates varied by race, from 58 percent in white women to 53 percent in black women and 51 percent in Hispanic women.

What might be most surprising is that a larger gap in guideline-based care was seen among patients treated at centers that had a large volume of cervical cancer patients compared with low-volume hospitals.

“It’s clear that the more surgeries you do, the better you get. But the ‘more is better’ mantra may not apply to guideline-concordant care,” he says. “These are facilities that know what to do, and they’re doing it. But they’re not doing it consistently across all populations.”

Over the time period, guideline-based care increased across all populations, but black and Hispanic patients still were less likely than white patients to receive care consistent with guidelines.

“Overall, it’s better for everyone. We’re closing the gap, but there’s still a gap. Even in 2012, we see a 5 percentage-point gap in guideline-based therapy,” Uppal says.

The study, published in Obstetrics & Gynecology, did not address reasons why patients might not have received guideline-based care. Cervical cancer tends to be diagnosed in younger women and more often in women facing socioeconomic issues. These factors could influence a patient’s likelihood to finish treatment, Uppal suggests. Some patients may refuse certain treatments.

The researchers plan to interview patients to better understand the reasons for this disparity and why there might be barriers to some patients getting treatment.

Not that care will ever be 100 percent aligned with guidelines — there are too many complicated factors for each patient. But Uppal expects rates around 75 percent would be a reasonable goal. That’s comparable to other types of cancer.

“Understanding the ‘why’ behind our findings is important — not just for minority populations, but for all. We can do better,” Uppal says. 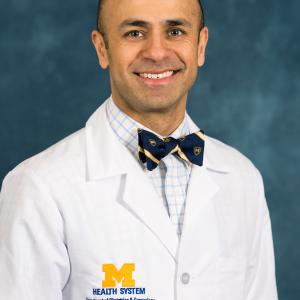