Elective outpatient surgery costs are rising. The burden is shifting to patients.

The cost of health care drives patients' decisions. What's behind the increasing costs for elective outpatient surgery, and what implications does it have for care? 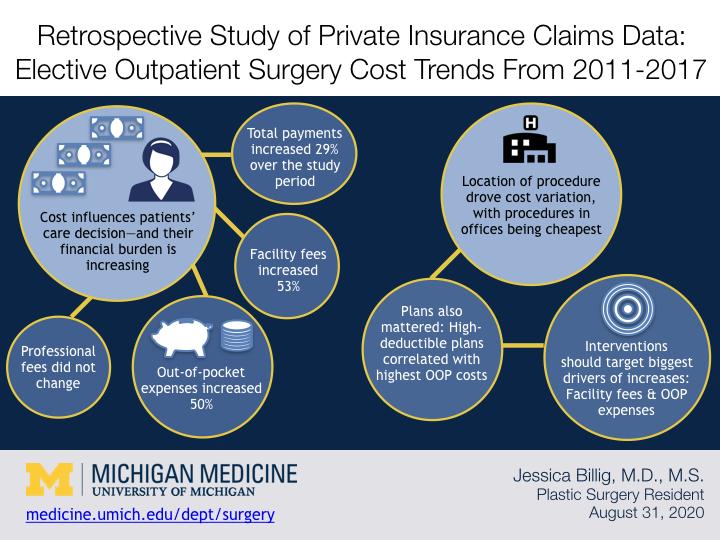 “Cost matters to patients, and when we think about patient-centered care, you have to include what it’s going to cost the patient,” Billig said.

A paper authored by Billig, Erika Sears, M.D., M.S., and Kevin Chung, M.D., M.S., and published in the Annals of Surgery, examined what that burden looks like when it comes to elective surgery procedures, and found that the weight of increasing health care costs is being carried by patients.

That shift in cost has implications for patient behavior and surgeons’ practices.

Costs are rising, and private insurance is not a shield

The data showed a 29 percent increase in total payments over time. The biggest drivers of the overall increase were facility fees, which increased 53 percent, and out-of-pocket expenses (OOP), which increased by 50 percent. Professional fees over the time period did not increase.

That patients with private insurance are seeing such an increase in financial burden for such procedures illustrates how tricky navigating the landscape is.

“Private insurance is what a lot of patients think of as ‘Cadillac insurance.’ You have the best insurance you can have, it’s what's given to you by your employer and you think you’re safe. The problem is you’re not safe,” Billig said.

That these increases in costs are associated with elective procedures is noteworthy, because care that starts as elective can cascade into urgent if deferred long enough—and financial concerns can drive care decisions, for better or worse.

“Your cataract surgery is elective to a certain degree. You don’t need it tomorrow, but at some point you’re not going to see. And that’s problematic for a number of reasons. The longer you let that go, the more complex that becomes,” Billig said.

When considering costs, it matters where a procedure is performed.

Hospital operating rooms and ambulatory surgical centers are more expensive to run than a simple procedure room in a clinic, so it’s somewhat intuitive that procedures performed in them would cost more than those performed in an office setting. Still, the way OOP expenses varied with location surprised Billig, and has made her think more about how and where to perform simple outpatient procedures.

“We think about a lot of hand surgical procedures. The simpler ones can be done in a lot of different settings. In the section of Plastic Surgery, we’re trying to do a lot more procedures in the clinic, like carpal tunnel release and trigger finger release,” Billig said.

Besides the cost of care, COVID-19 helped nudge this adjustment along; with operating time being squeezed due demands on hospital space and safety precautions, there’s incentive to utilize clinic space for simple procedures that don’t require the bells and whistles of a hospital setting.

Perhaps reflecting trends in the types of plans patients are opting for, what employers are offering or both, deductible payments over the study period increased 84 percent, while coinsurance payments increased 41 percent and copayments decreased 30 percent.

“We’ve seen an increase in high-deductible health plans and I think it has a lot to do with people being concerned with premiums up front. But if you have a $5,000 deductible and your procedure costs $2,000 and you’re paying all of it out of pocket, then insurance means nothing,” Billig said.

Since the nature of elective surgery is less pressing, savvy patients could in theory shop around, but it’s intimidating and confusing territory, Billing said:

“The weeds are thick.”

If what drives costs is complicated, trying to shift some of the financial burden off of patients is potentially moreso.

“Transparency is complicated because everybody’s health insurance is different and the plans within it are different, so you don’t know what the out of pocket costs are going to be,” Billig said.

If providers have the flexibility to perform procedures in cheaper settings, that’s one clear way they can help patients.

“It is going to be cheaper to have it done in the office and that's something that as a provider you can tell the patient. You probably can’t tell them exactly what the difference in cost would be but you can tell them it will be cheaper,” Billig said.

As with a lot of changes, barriers exist to getting surgeons to reconsider where they are performing procedures. Some of those barriers are logistical and involve equipment and staffing. Others are more nuanced, and have to do with the rhythm of the day, and the clean division a lot of providers have between clinic time and operating time.

“People have a clinic and they have time slots for patients. If you’re doing a procedure in the middle of that, it throws the Zen of your clinic off,” Billig said.

Incentives can help remove barriers, and Billig is hopeful a financial incentive for providers and institutions might help change behaviors. She’s pursuing a modifier 22 with Blue Cross Blue Shield of Michigan to reimburse procedures performed in office settings at a higher rate. Her hope is for a win-win. 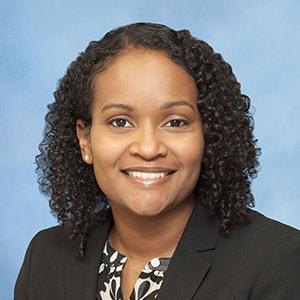 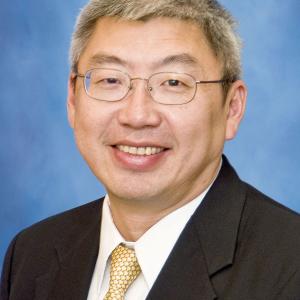