Linda Elam is a health policy and management leader with deep expertise in the financing and delivery of health care to vulnerable populations. Presently, Elam is CEO and Plan President of Amerigroup, District of Columbia, Inc., a Medicaid managed care plan that went live October 2017, covering roughly 50,000 D.C. residents. 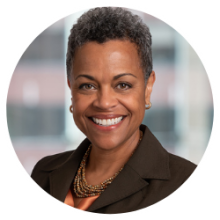 From March 2014 through the end of the Obama Administration, Elam served as the deputy assistant secretary for Planning and Evaluation directing the Office of Disability, Aging, and Long-Term Care Policy (DALTCP) at the U.S. Department of Health and Human Services (HHS). At DALTCP, Elam provided leadership on HHS policies supporting the independence, health, and productivity of elderly individuals and people with disabilities, including issues related to integrated care, rehabilitative services, mental health parity, post-acute and long-term care, employment, and the direct care workforce.

Previously, Elam served as senior deputy director and State Medicaid Director at the District of Columbia’s Department of Health Care Finance (DHCF). As Medicaid Director, Elam oversaw the offices responsible for program operations, policy and research, health care delivery management, health reform and innovation, long term care, and the Office of the Medical Director. She began her tenure at DHCF directing the Health Care Policy and Planning Administration within DHCF and she served as agency interim director during the 2011 mayoral transition.

Before her government service, Elam was a principal policy analyst with the Henry J. Kaiser Family Foundation, where her areas of focus included prescription drug policy, racial and ethnic disparities in healthcare, and mental health. She has authored and contributed to briefs, journal articles and book chapters, primarily in the area of prescription drug policy for low-income Americans. In 2012, Elam was selected as a fellow in the Centers for Health Care Strategies/Robert Wood Foundation Medicaid Leadership Institute. She is an elected member of the National Academy of Social Insurance, and in 2013 she was inducted as an alumni member of the Alpha chapter of Delta Omega, the public health honor society. She currently serves on several boards and commissions that focus on health equity and improving health outcomes for vulnerable populations.

©2021 The Regents of the University of Michigan | Disclaimer | Privacy Statement